Home :: Blog :: Gaming :: Accessibility: why I can play heroes of the storm

In February, I got invited for the Heroes Of the Storm (Clarified as HOtS in the rest of this article) closed beta. While I was having a pretty good time in Dota, there was always this nagging issue that I couldn't get very good with carries because of the persistent last hitting problems that I have due to my visual impairment. Plus I pointed out some difficulties I have orienting attacks because of the way dota doesn't give you helper UI for anything.

Dota's "Last hitting mechanic" caused the most severe accessibility issues for me, as I have to stare to a tiny fraction of health and ain right to hit the last blow, that is very tough. In hots, that mechanic is not present. I'm not going to get into all the differences on the skill cap between Dota and HOtS . Surely we can create a lengthy article on how you don't have to memorize every single item you can purchase (and there's even 8 more added to that since april), what said item is in what store you can buy it, or how experience is shared for the entire team instead of individually, or how every hero has a base teleport ability "built-in", or how you don't have to worry about what kind of damage can hit a building etc. I want to talk about accessibility, not game mechanics. I appreciate the higher skill cap in Dota, but HOtS gives me a generally improved gameplay experience because of the accessibility.

So I want to talk about the way HOtS tackles specific accessibility issues. They seemed to have nailed that part to the point that it becomes very suitable for me to play, and therefore, it gives me much more awareness of my team and the heroes.

The heroes generally move slower than dota, but you you can't underestimate the slightest change that can make something work better in a game for me.

2. Heroes are "bigger"
The heroes in HOtS are also generally wider than in Dota. That doesn't mean much on it's own but in combination with the gameplay which also is a bit slower, but itg enables me to focus better on where my team is and where I am in relation to the team.

3. Better hero UI
Points one and 2 come together nicely in Blizzard's design decision for the UI and hotbars.

I'm going to give you an example of what I mean: 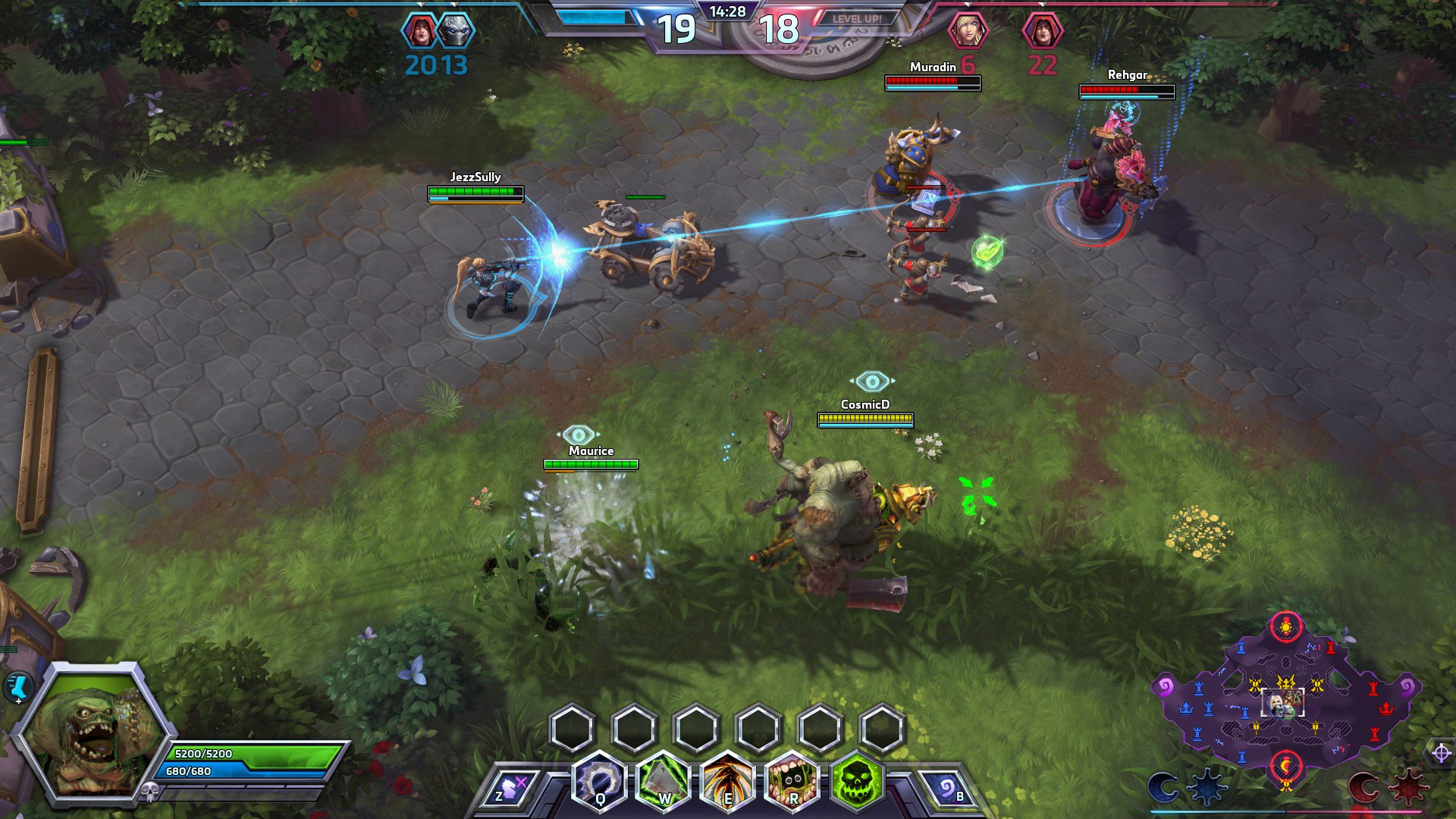 There are several things I want to point out here. For starters whenever you are in the "fog of war" or behind objects that make you invisible for the enemy, you'll get an eye icon on top of your head. That icon turns red if the enemy has vision on you. For me this feature alone makes me uch more aware on my positioning, and so I can be "sure" that I'm really hiding in the bushes.

What you also see are the circles around the heroes of our team and of the enemy team. Not only are they much more visible than in dota (Dota's hero rings are like hairlines in comparison), also the coloring shows that I am Stitches, the hero with the yellow ring. The rest of my team has a blue ring and the enemies are red. If you read my article on Dota, I pointed out a problem that I can't react fast enough when enemy heroes are coming out of the fog of war. Because I have bad visual memory and can't quickly register if that hero is an enemy or not,  but with the red rings, I always know this regardless of there being 2 Diablo's in our game (ours and the enemy team)

And finally, the ring has a nodge pointing in the direction the hero is facing. All of this makes it that I can plot my positioning much more reliably.

4. There are cursors reticles for the spells that you can cast which obviously illustrate what your spell will do. Some will show the area of effect they have, and some will show you the direction they (or your hero) will go at when you execute them. This might be trivial and maybe even downright unacceptable for "pro dota players". But for me it's a blessing. 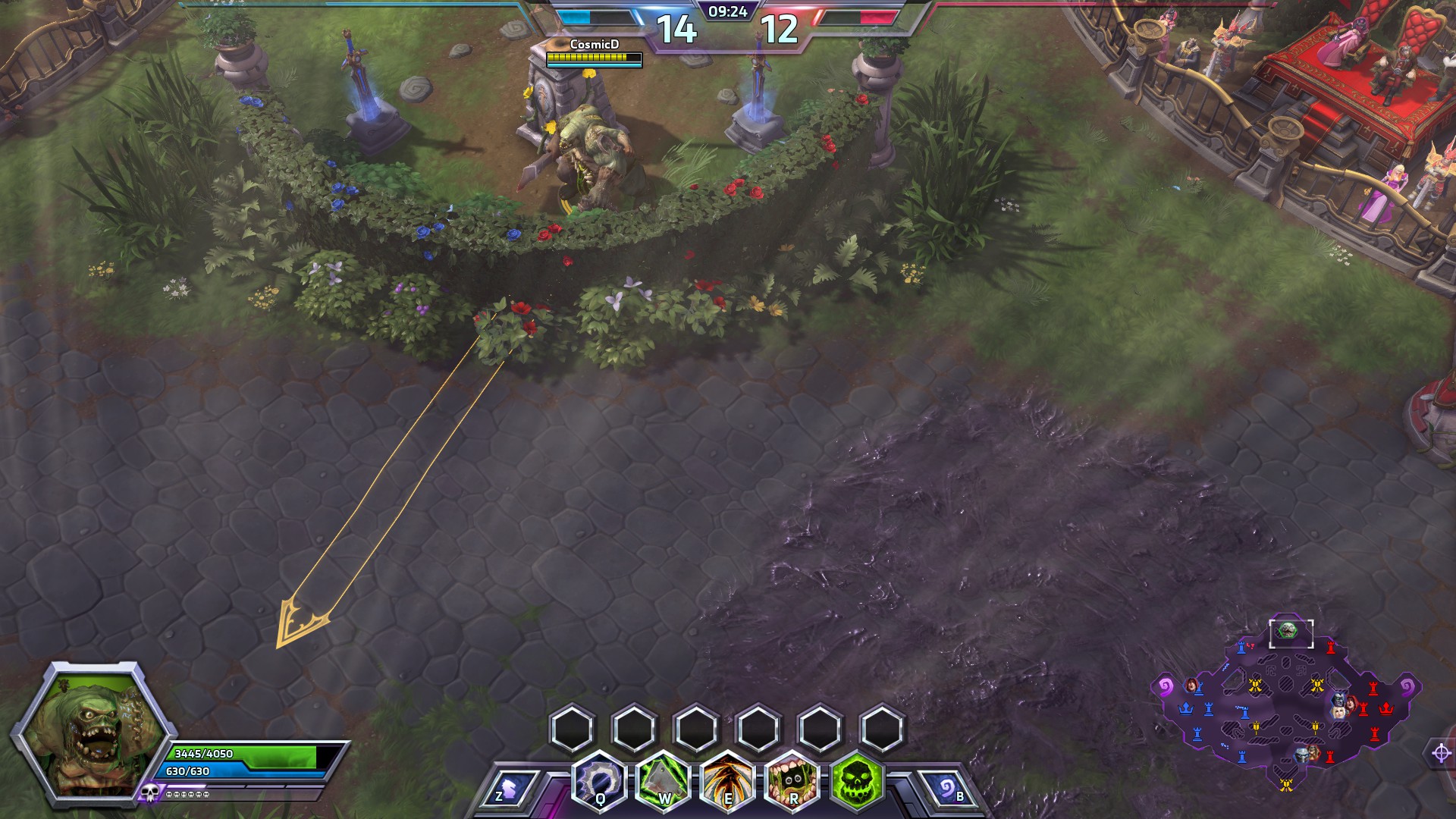 As you see I'm about to cast a hook with Stitches. I know there's no enemy or they might be invisible because I'm behind the shrine's bush. I see that I can point the ability this way but the color gives away that I won't hit anything. It's obvious. It will become green when it can connect to an enemy. 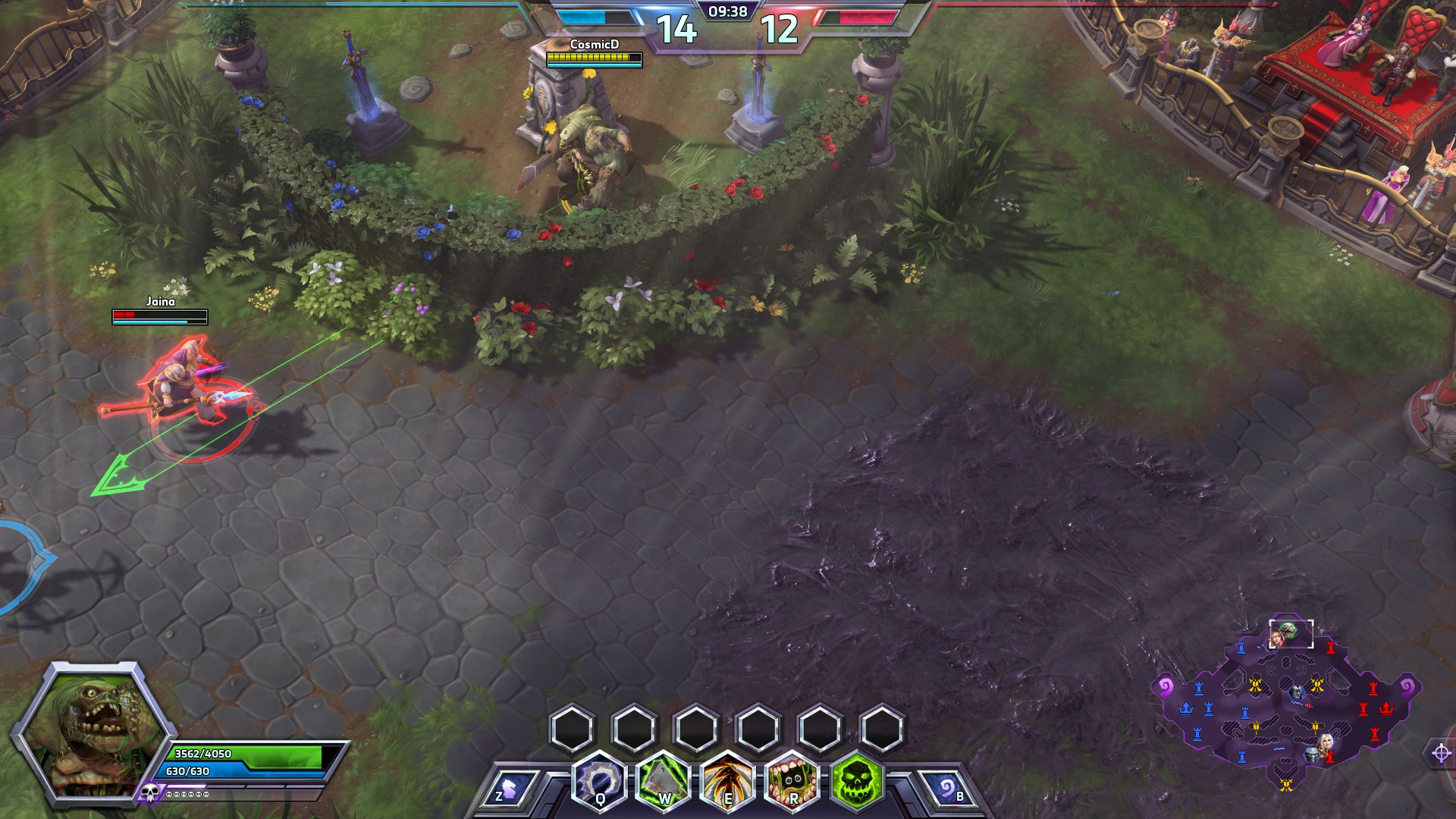 This shows the state where the ability can connect. Like with Pudge in Dota, the hook still won't auto aim and latch onto enemie heroes but that isn't the point. I never had problems with wanting to skilfully predict and use the spell,, it's just that in HOtS, the pointer is extremely helpful to know what direction my hero is facing and so I can time my attack more securely.

5. There are little helpers such as mounting and casting timeout hotbars. If you are using your mount it won't spawn instantly (unless you are in the fountain). You'll see a little bar in the bottom that tells you the time it takes to mount. Some abilities are not "one shot" and are cast during a passage of time. You see that in a bar which will deplete and then the ability stops. Ofcourse there are also the obvious objective bars that tell you how long it times to convert a merc camp, submit gems or doubloons, take the dragon knight etc.... And when you are low health you hear a little audio cue to announce that. 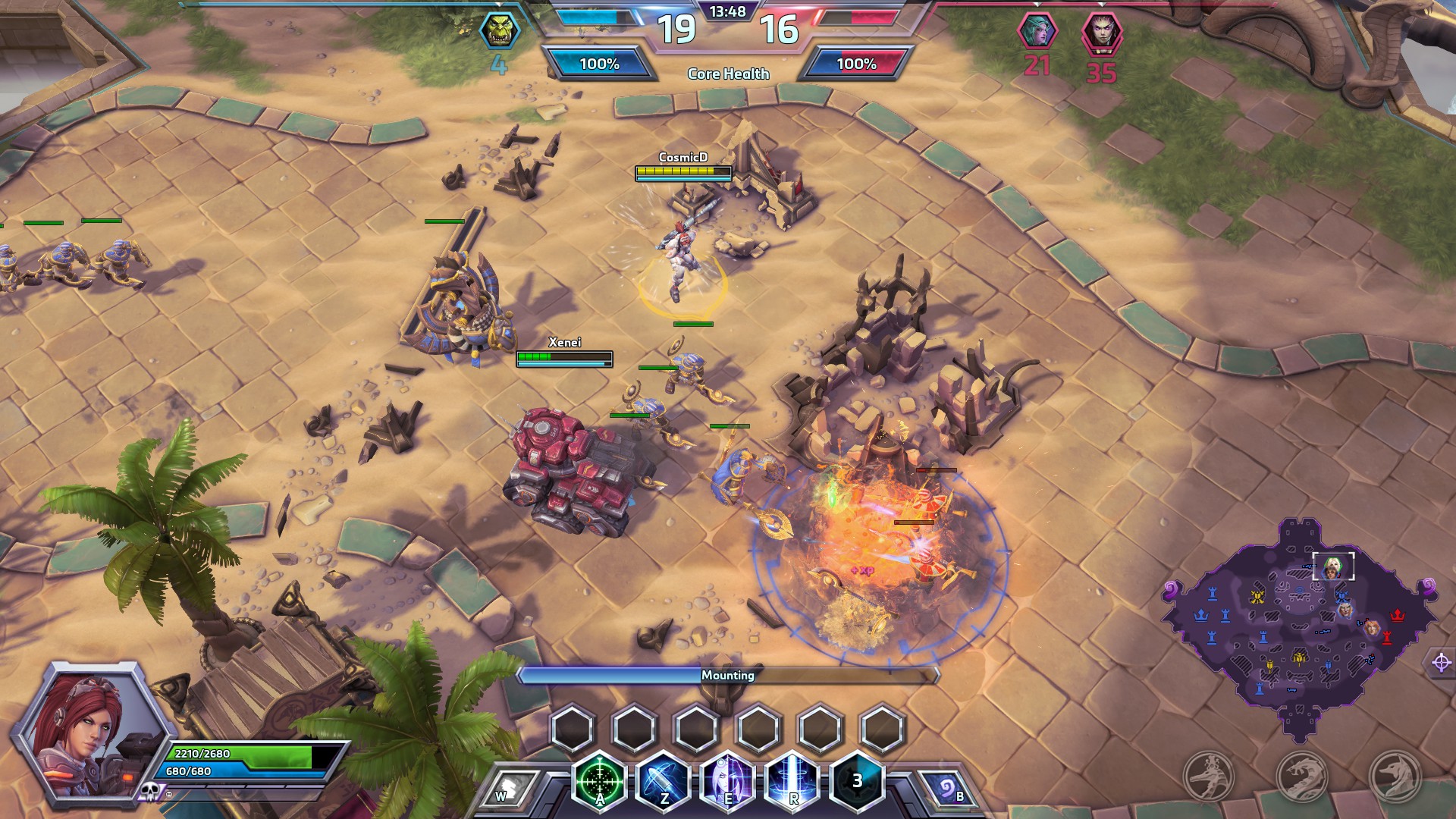 6. The extra information on enemy conditions is also a welcome treat. Enemies show their conditions, are they stunned, rooted, disabled, silenced, it will show on their playercard. If an enemy Butcher starts his ruthless onslaught attack, it shows on top of your character. This is not only helpful from an accessibility perspective, to see that your spell had effect on them, but also it's great for newcomers to know the difference of their actions. 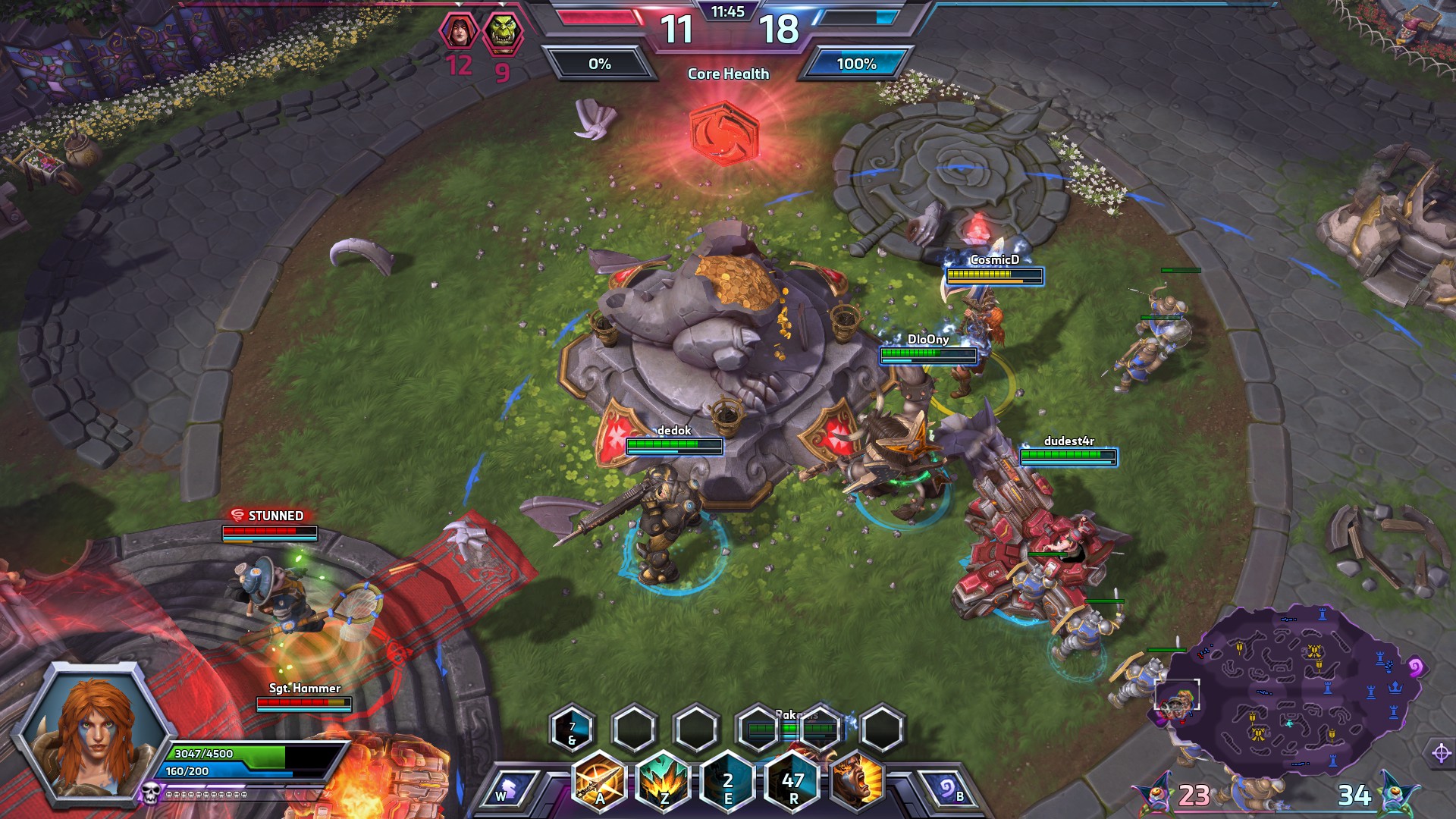 The extra information doesn't stop there. If you choose to take a new talent, information is given on how it relates to your hero. Is it an upgrade talent for your trait, heroic or for one of the normal spells ?

Lately there has been updates to the forts and buildings, they will show a reticle that points at you when the tower begins to start shooting, and you'll hear a chime sound. These things are so helpful and it gives me a more safe feeling playing this game. 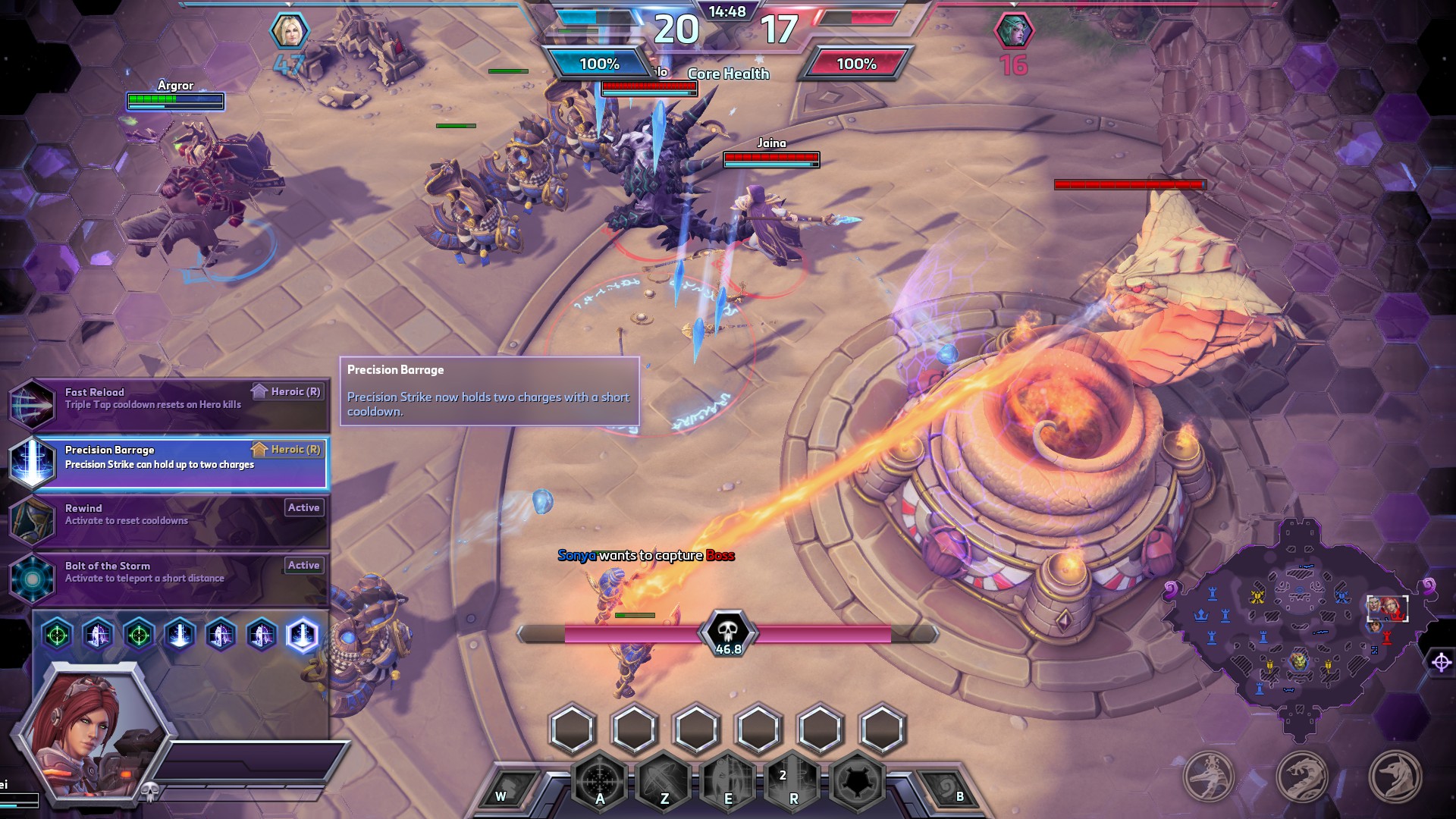 Before my closing statement, like to thank the maker of this fine mouse pointer modifier program called YoloMouse. This is a lifechanger for me. In MOBA's like these, you need to move your mouse pointer across the screen very quickly to direct your character's actions and to keep on top of things. The high contrast pointers that replace the normal cursors are a HUGE help for me in this regard. I can keep focused and I always see my mouse cursor.

I'm just happy that Blizzard went that road with this game. It's a helluva lot more accessible to me than Dota. And all these heroes have their own specific spell cursors, from Li Ming's unique magic missile distribution reticle to Cho'Gal's dark "telescopic" ball lob pointer. There's timers in your hotbar for several situmations. It'll illustrate the seconds until you can drink again from the fountain, it will illustrate some edge cases, for example if you're Leoric and you are haunting your enemies (how many seconds you cheated death), the UI shows where your egg is when you're murky.. If I play with Sylvanas she'll show a purple cursor on the target she wants to spam her whithering arrows to. I'm sure that the dota version would be that you'd have to guess all that. Luckily this is HOtS and it's just illustrating and telegraphs things better.